When's the last time you played a hard hitter 💥? Did it feel like the ball was coming back to you at light speed ⚡️?

I feel you ❤️: I played one last weekend. It was a rematch and, although I lost again, this time I went much much closer 💪. (Cannot wait to play her again!)

And you know what made a big difference? Not only did I improve my footwork 👣 from last time, but I also paid much more attention to my tennis court positioning 📍. And yep, that was absolutely game-changing!

Hi, I'm Elena Margaria 👋 and just like you, I'm on a mission to become the best tennis player I can 🥇. Even without a fancy team, or too much talent. Just with a huge desire to make it.

But back to business!

If there's one thing you can work on to make your tennis instantly (!!!) better, that is your court positioning! (For real, it is that important!)

So here you have it, an entire blog on why you want good court positioning in your tennis matches and a few simple strategies you can use to find the recovery position that guarantees you optimal court coverage basically in every situation.

Hope you're ready, 'cause there's a lot to learn and try: just take a look at the Table of Contents 👇!

Oh and if you make it to the end, there's a surprise waiting for you 🎁! It's a super eBook with the 5 smart moves that... 😳🙈🤷‍♀️ Ooops! What kind of surprise is that?! Ok, nevermind!

Before you get started... I really (really!) think you're going to find this blog full of useful info and actionable tips. So if you do, please don't forget to leave me a clap (or two) so I know you did! You'd really make my day 💕.

What is tennis court positioning?

Tennis court positioning refers to the positioning on the court that lets you reach your opponent's shots as fast as possible ⚡️. In other words, it's the recovery position (the position you go to after hitting a shot) that gives you the best court coverage.

In order to recover to the right position, you need to take into account different factors:

🎯 the direction of your shot

💥 the depth of your shot

📍 the position of your opponent

❤️ the tendencies of your opponent

Those are a lot of things to consider, I know 🤯. But here's the good news: it does get easier fast. Actually, you know what? It gets totally automatic after a while ⚙️!

Of course, first you need to get how it works. But then, with a bit of practice, you can expect to set the auto-pilot 🏎 and never have to think of your court positioning again!

But before going through the fundamentals of good tennis court positioning, let's first understand why recovering to the right spot is so important for the outcome of a match.

Court positioning plays a big role in tennis and can even be the one factor making the difference between winning or losing a match ⚖️.

Indeed, when you have good tennis court positioning, you can move efficiently on the court. And that means that:

🔥 you can catch otherwise-uncatchable balls

🔋 you can spend less energy to get to the balls

So you see?! It's pretty important! And, especially if you're like me and have no intentions to leave wins on the table, you should get good at it and fast!

So... let's get you started with the right foot 🦶🏻with the basic rules of good tennis court positioning.

Here's one simple rule you can follow to lay a good foundation for your court positioning, based solely on the direction of your shot 🎯.

🔊 Always recover to the center, slightly off to the side of your opponent's crosscourt shot. 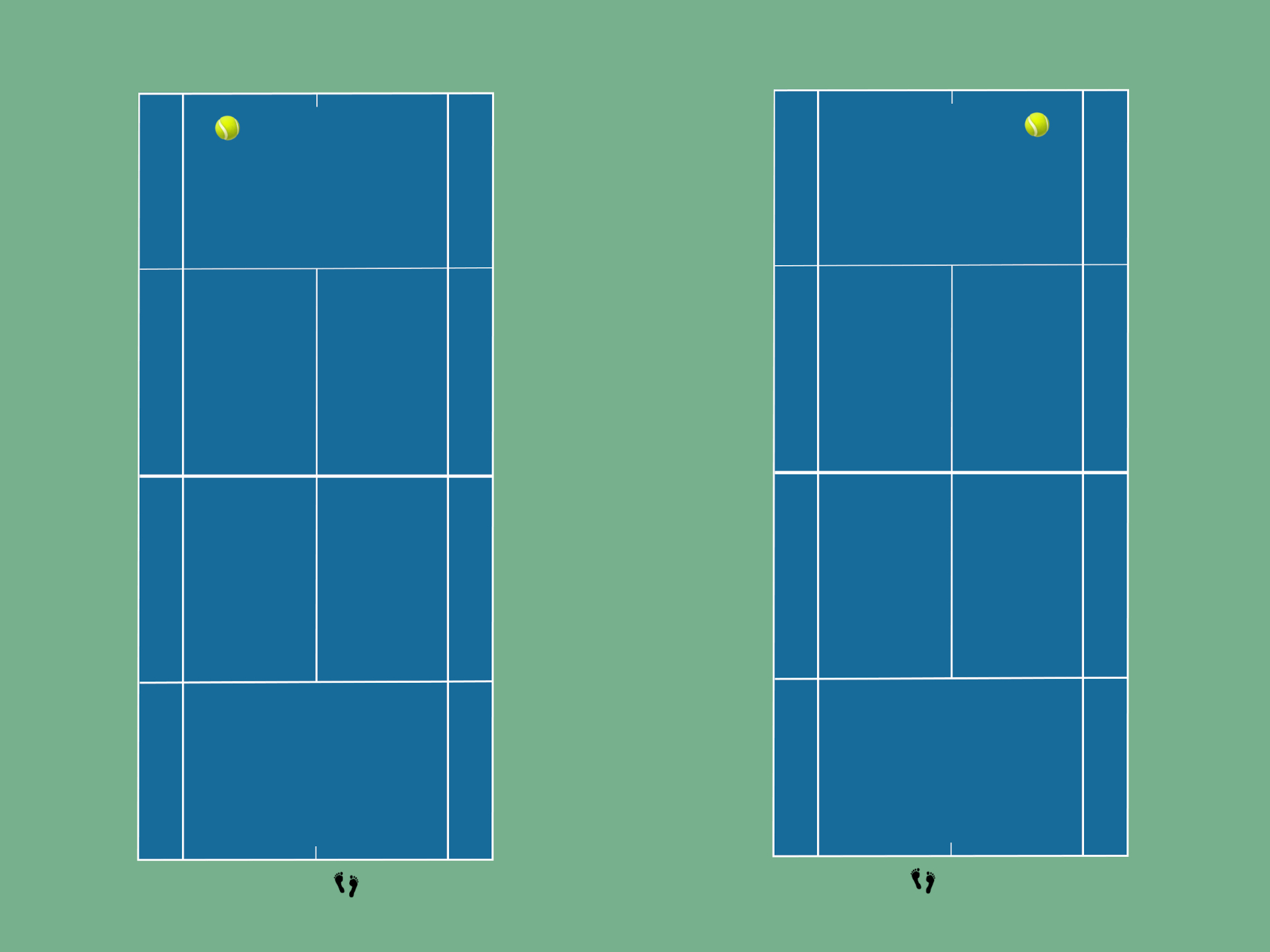 This guideline is extremely simple, yet very powerful, as it hides the complexity of court positioning, but at the same time, summarizes the essence of it. Which is what makes it actionable ✔️.

If you think about it, the goal of this rule is to make you recover always right to the middle of the angles your opponent can play 📐, so you can reach the next ball in the shortest amount of time.

Not convinced? Here's the geometry behind it:

🔺 When your opponent plays crosscourt (statistically, most of the time!), there's a good chance you'll have to move past the singles sideline.

🔺 When your opponent plays down the line, there's no way you'll have to move past the singles sideline.

That's why the best recovery position is not right in the center but slightly off to the side of your opponent's crosscourt shot! Now it makes sense, doesn't it❓

But as I mentioned above, the direction of your shot is not the only factor to consider. In fact, while it should be the starting point for a better court positioning, you shouldn't stop there ❌!

Instead, once you get comfortable with this basic rule, you should add up to it and tune your recovery position according to the other factors as well 👇.

The higher the level of your opponent, the more vital it is to recover to the right spot for an optimal court coverage and, at the same time, the trickier it gets to know which one is the right spot 🤔.

And here's why: the higher the level, the wider the variety of shots your opponent can play 🌈. Which means, you clearly cannot base your decisions solely on the direction of the ball!

At this stage, you cannot neglect anymore the depth of your shots 💥, as this may strongly affect the choice of your opponent. If your shot doesn't land long enough, your opponent will probably take the opportunity to attack you down the line, so covering that side a bit more than usually may be a smart move.

Just as important as the depth of your shots is the position of your opponent 📍. Let's say you catch him by surprise and he's going through hard times 🥵. You can be pretty much sure the next ball you'll get will be weaker, or a desperate attempt for a winner down the line. So what's a good spot to recover in this case? Again, more in the center than on the side of the crosscourt as you'll have a chance to catch the down the line bomb, without risking too much in case he goes for crosscourt.

And finally, if you know the tendencies of your opponent ❤️ or can read his shots before he hits them, then you'll have a huge advantage. In general, the backswing and the stance can give you great clues, so pay attention and tune your recovery position according to them!

By the way, to get good at reading your opponents and to learn their tendencies, I cannot recommend you more to scout them 🔍.

👉 If you don't know what I mean by scouting, then you should definitely take a look at my tennis scouting guide and get familiar with it. You're missing out without scouting!

👉 If instead you know exactly what I'm talking about, then I hope you're using my scouting template already. Otherwise, what are you doing?! Grab it immediately!! (It's at the bottom of my scouting guide.)

How smart do you move around the court? 👉 Get the court positioning CHEAT SHEET and check that these smart moves are a part of your game!

09 Jun 2021
#HABITS
5 bad tennis habits preventing you from winning more matches
Wondering if you could do more to win your matches 🤔 ? Break free from these widely-spread poor tennis habits and you'll stop leaving wins on the table!
28 May 2021
#PLAYTOWIN
Tennis drop shot - Practice tips and winning strategies from a dropshot-addict
Wish you could hit drop shots like Bublik 🧙 ? Find out my simple-yet-effective drop shot secrets and start developing your soft hand right now!
24 Jan 2021
#PLAYTOWIN
Where to stand on the return of serve - and better cope with hard serves
Have a hard time returning well placed, bomb serves 💣 ? Adjust your position the right way and your return percentages will go up!
Comments
Loading...