Wish you could hit drop shots like Bublik? Well, how to blame you: his touch is unbelievable!

But no wonder, with all the drop shots he hits all the time how could it be any different!?

I'm not sure my drop shot/match ratio is as high as Bublik's, but for sure is not very far. Which means, my touch is not that bad either 😜. Or at least, it's getting there!

I'm Elena Margaria 👋🏻 and just like you, I'm on a mission to become the best tennis player I can 🥇. Even without a fancy team, or too much talent. Just with a huge desire to make it.

But back to business!

Drop shots are my absolute favorite shot (yes, they even beat my beloved backhand 😳), so I thought why not share my unconditional love for them on here, since I'm still coming back from my latest injury and cannot really keep sharing it with my opponents yet?!

So here I am, walking you through my crazy obsession for drop shots ❤️, giving away my simple-yet-effective drop shot secrets 🤫 and sharing my 2 cents on how to develop a soft hand as fast as possible ⏳.

Enjoy your read 🤗, I'll see you in the comments!

If it was for me, I'd drop shot every other point. And I'm not kidding 🙈. I just love it!

Practice, match... it doesn't really matter! The thought of hitting a drop shot is always there, just around the corner, and as soon as I get the right ball... tadaaa, I have to hit one!

The only time I actually do try to keep myself from doing too many is when I practice with my friend Tupu: we're good friends, and never would I want to ruin our friendship because of my annoying drop shots 😂! That would be a pity.

But except for Tupu who's lucky enough to get this special treatment 😜, I don't really have much mercy for anyone else when it comes to drop shots, not even for my coach Dom.

Just look at this Whatsapp message I sent him a while ago, when I still couldn't play because of my latest injury 👇. 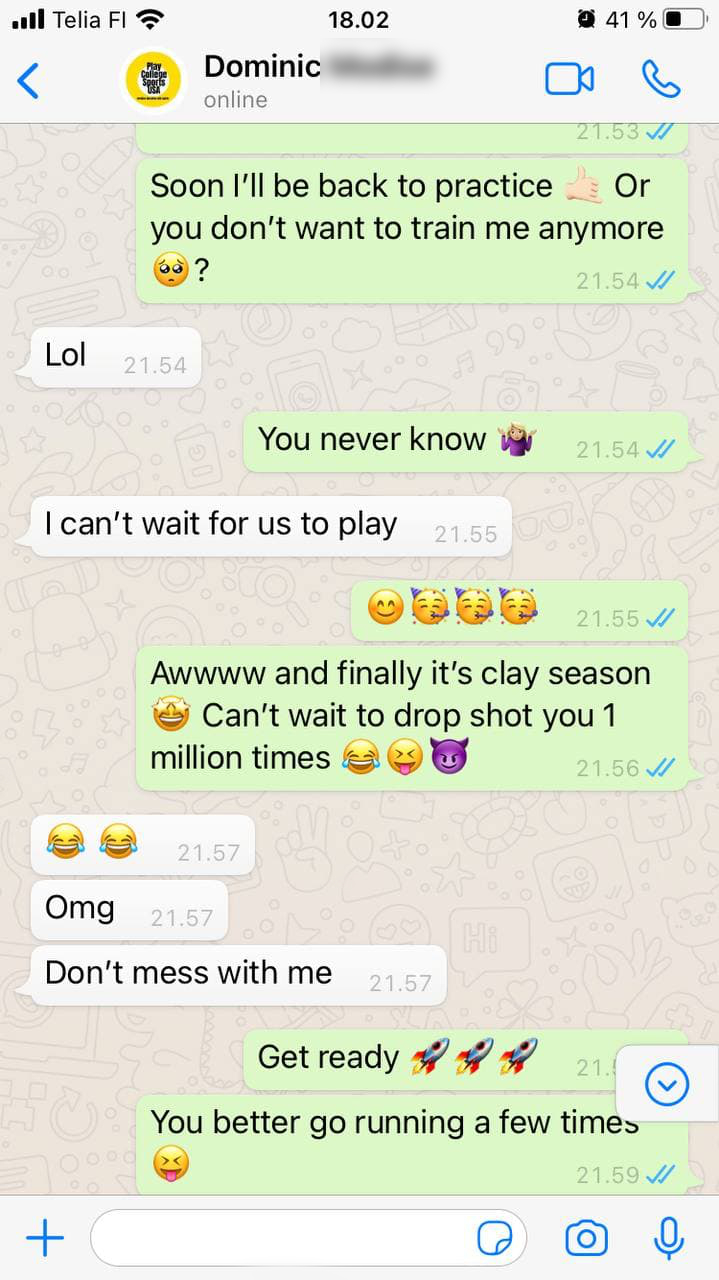 Yep, drop shots are really my signature shot. Everybody knows it. And those who don't, they usually find it out sooner than later 😈.

After all, what kind of puppeteer would I be if I didn't have the drop shot in my artillery?!

And the craziest thing of all is that drop shots are so ingrained in me that I don't even have to think anymore where to hit them or where to move afterwards. It all comes automatically! (And it's so handy!)

🔐 Secret #1 → My go-to drop shot placement is down the line. Always.

And the reason is very simple 👉. On one hand, it's easier to hit as you're closer to the target than if you were to hit it crosscourt. And on the other hand, it's also more effective as it takes less time for the ball to land, which means your opponent has less time to react and reach it.

By rushing to the net (the closer the better!), I leave no chance to my opponent. In fact, unless the drop shot comes out too high (case in which it's more a suicide than a drop shot 😂), if my opponent gets to the ball, she will get to it when the ball is already low, which means she'll have to hit it defensively: slow, and low to high. By being at the net, I can close that ball no problem, nice and easy.

🔐 Secret #3 → I never hit a drop shot from behind the baseline.

That is just too difficult. And the probability of missing it too high. Not worth it! Especially if you also take into account that the further you are from the net, the longer the flight time of your drop shot, which means the easier it gets for your opponent! Definitely a big NO!

🔐 Secret #4 → I usually hit my drop shots after an attacking shot.

That's when it works best! My opponent is in defensive mode, well behind the baseline and ready to contain my next deep, hard shot and... pouf, drop shot it is! Most of the time, she doesn't even try.

Awww, that works like magic ✨! And it's so satisfying you cannot even imagine! Plus, it's easy, as you can decide in advance to go for it. Oh, and messes up with your opponent like nothing else: after all, on a second serve, isn't it the last of your thoughts too to get ready to run forward?!

As you can see, very simple rules. But trust me, that's all you need to hit winning drop shots. That is in addition to a soft hand, of course!

Just hit as many drop shots as you can: it's simple as that.

That's how I got good at it. And that's how you get the hang of it!

Of course, if you don't currently use the drop shot as much, then you'll probably miss many before mastering it. (I must have missed thousands by now 😂!)

But never ever think for even a second that you don't have the hand for it, or that drop shots are just not your thing. Because it's not true. Remember: it's all a matter of practice!

Speaking of which, if you knew how much time I spend in the small boxes before going to the baseline, you'd think I'm crazy 👀!

But hey, honestly... how else can you train your hand to be soft without making your practice partner mad if not in the small boxes?!

Not to mention that the number of slices and drop shots you get to hit from there is all another level. Just think about it: it would take you triple time from the bottom to hit the same number of balls!

Oh and another great way to practice drop shots (which is probably my favorite) is on the return of serve, when your partner is warming up her serves.

Not only you don't drive her crazy for no reason, but you also get to train your touch in a real situation, and possibly one of the best times to surprise your opponent in a real match (remember secret #5?!).

Sooo... you ready to become the next drop shotter and drive your opponents crazy?! (And excite the crowd too 😉?!)

Awww, it's so much fun 💃! I really don't get how people can play an entire match without a single drop shot. That is pure madness!!

Remember: it's not about talent, it's all about practice! And I'm proof of that: if I know how to hit drop shots better than most of my opponents, it's just because I hit so many so often that of course I got the hang of it.

And so can you! So... what are you waiting for?! Go hit some drop shots and have fun!

But not before clicking on the clap button below, ok?! It's always nice to know you've made it this far 💕.

Ciaoooo! I'll see you in the next blog!!

29 Jan 2022
#HABITS
How to become a better tennis player overnight
Wish you had a magic wand to step up your game right now ⏰? No need for one. Just focus on one of these aspects and that will do the trick, I promise!
23 Jun 2021
#EMOTIONS
Tennis body language secrets - How to send and pick up silent signals on the court
Ever noticed that your opponents speak to you without actually speaking to you 😶 ? Take my crash course and start making body language work for you!
15 Jul 2020
#TACTICS
Forced errors - How to make your opponent miss
Looking for ways to win points even without winners 🧠 ? Smart! Use these ad-hoc strategies to force your opponents into errors and you'll thrive on the court!
Comments
Loading...