"If only I could win more points, I'd go to the net all the time!"

That was me 🙋🏼‍♀️... until the other day, when I finally discovered what made it so easy for my opponents to pass me!

And now? Now I rush to the net as soon as I have the chance 😎!

Plus, whenever my opponent comes to the net and makes my same mistake with her approach shot, tadaaaan: I punish her right away with a passing shot she cannot even touch 😈.

"Arrggghhhh, why didn't anyone tell me before?!"

That was my reaction when I finally got it 🤦🏼‍♀️. And I'm pretty sure you'll think the same once you hear what's the trick and try it for yourself.

But hey, better late than never!

Btw if you’re new on this blog and have no clue about who I am, I'm Elena Margaria 👋🏻 and just like you, I'm on a mission to become the best tennis player I can 🥇. Even without a fancy team, or too much talent. Just with a huge desire to make it.

So here I am, sharing with you my latest discovery: where to place your approach shot to have the best chance to win the point at the net.

Oh but wait! I was about to forget... it's time for some exciting news 🥁!

Did you notice the little hashtag #playToWin?

Well, that hashtag is not there just because it's cute or cool (even though I must admit it's pretty awesome 😍).

It's there because this blog post is the first of a new, hopefully-long series called Play To Win, all about tennis strategy and must-do in very specific match situations (just like approaching the net), to make sure you get the job done, nice and easy!

What do you think?! Are you at least half excited as I am? I really hope so!

Because here's the thing: technique is important and all you want, but it doesn't win you matches. Doing the right thing at the right time does.

Which is exactly why this series #playToWin exist. To collect all those tiny little strategy tips that make all the difference in the world 🌎, and yet are so underrated 🤫.

But ok, enough dicking around. Let's get to my recent discovery.

As always, first things first. How did I found out what was wrong with my approach shots?

The other day, at practice, we were doing this simple drill: 3 shots down-the-line, 1 shot cross-court with the possibility to follow it to the net if we felt like it.

If you know me at least a bit, you should know I'm not really the aggressive player who wants to finish the point at any cost (I actually have more fun making you run right and left a little longer and seeing you struggle to get your winners done 😈).

So you might think I rarely found a good ball to attack and rush to the net. But the truth is, when I'm practicing (especially lately) I'm actually trying to push myself to get outside of my comfort zone and be comfortable with it. Which means, I actually went to the net a lot.

Then we did the same drill, but with 3 shots cross-court, 1 shot down-the-line. And guess what?

And no, that's not because of some random coincidence: my friend on the other side of the net got pretty much the same numbers!

In fact, that's actually when I was the one being attacked that I had my big realisation. That is, doing a winning passing shot on a cross-court approach shot is waaaaay easier than on a down-the-line one!

But why does it feel like a piece of cake to do a winning passing shot on a cross-court approach shot?

Because you literally have a highway to pass your opponent down-the-line, if she attacks you cross-court. That's plain simple geometry! Just take a look at the picture below 👇🏻. 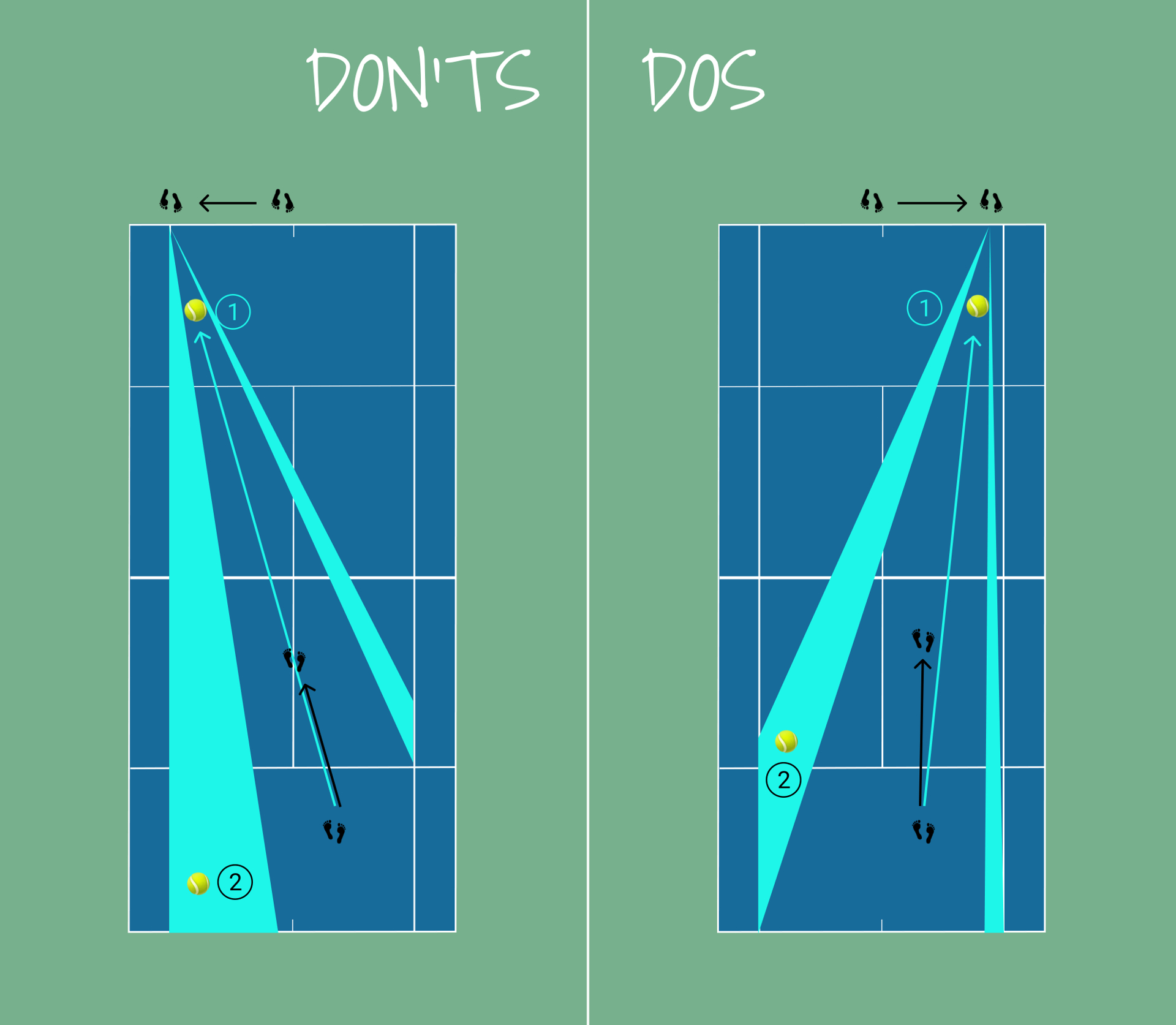 As you can see, placing your approach shot cross-court makes your opponent's life reaaally easy. And the reasons are many and more or less obvious 👇🏻:

📌 the distance she has to cover to reach the ball is muuuuch shorter than if you placed it down-the-line, especially if she follows the basic rules of tennis court positioning to the letter;

📌 the distance you have to cover to get close enough to the net is much longer than if you placed it down the line, as you need to move diagonally to follow the trajectory of the ball;

📌 the room she has for her passing shot down-the-line is so wide she really needs to put a huge amount of effort to miss it;

📌 her passing shot down-the-line takes absolutely no time to travel across the net, which makes it super hard for you to react on time and catch it.

So nope, attacking cross court is not really the wisest decision!

Since then, I practically banned the cross-court approach shot from my game 🚫.

Yes, it still happens once every Pope's death, but just when I see my opponent really out of the court, on the other side!

For all the other cases, down-the-line is my no-brainer choice.

And you know what? This little change in my approach shot strategy made my percentage at the net fly through the roof 📈. For real!!!

But no wonder! After all, I went from hitting my approach shots cross-court and leaving a highway for my opponent to pass me (that was dumb 🤦🏼‍♀️), to hitting them down-the-line and leaving my opponent left with little to no room to pass me...

So of course! When all you get is either an easy volley or a free point, how can you have a low percentage at the net?!

Trust me, it doesn't get much easier than that 😅.

Moral of the story... if something doesn't feel quite right, it probably isn't. So don't just stick to your usual pattern of plays because that's what you're used to and bang your head countless times.

Instead, ask yourself why what you're doing doesn't work. And always (always!) use geometry to help you make smarter choices. Your game will make giant leaps!

That's all for this episode of #playToWin. If you found it helpful and would like to see more of these #playToWin blogs, click on the clap button below and let me know!

And if you have any Qs about this or other match situations, don't be shy and comment below! It always makes me happy to read your messages 💕.

22 Jan 2020
#TACTICS
Tennis shot selection strategies
Want to get better at playing the right shot at the right time 👌 ? Start from these shot selection strategies and make them automatic: your choices will be narrower and your decisions smarter!
24 Jan 2021
#PLAYTOWIN
Where to stand on the return of serve - and better cope with hard serves
Have a hard time returning well placed, bomb serves 💣 ? Adjust your position the right way and your return percentages will go up!
15 Jul 2020
#TACTICS
Forced errors - How to make your opponent miss
Looking for ways to win points even without winners 🧠 ? Smart! Use these ad-hoc strategies to force your opponents into errors and you'll thrive on the court!
Comments
Loading...