Wondering if it’s normal to suddenly lose a stroke? Let me tell you: yes, it is.

In fact, I’ve just recently lost one myself: to be precise, my forehand.

And guess what? It was horrendous feeling 🙈. But I’m sure you know that already.

The good news is, after trying a bit of everything (that’s a lie, literally everything) I finally got it back 🥳.

Which is why I want to keep a record of what happened, what worked and what didn’t: so it doesn’t only help you find your own lost stroke, but me as well 😁.

(Cannot always just take care of others, I gotta take care of myself too! Right?! After all, who knows when it’s gonna happen again, so if I can have a ready-made solution for the next occurrence, why not?!)

Btw if you’re new on this blog and have no clue about who I am, I'm Elena Margaria 👋🏻 and just like you, I'm on a mission to become the best tennis player I can 🥇. Even without a fancy team, or too much talent. Just with a huge desire to make it.

So you ready? You better be, because it’s gonna be a roller coaster of emotions 🎢. Just saying!

As always, here's the Table of Contents 👇🏻. Make good use of it!

Table of contents
1. A little behind the scenes of my forehand 2. That weekend when I lost my forehand 3. How I found back my forehand 4. My 2 cents on losing a stroke

A little behind the scenes of my forehand

As you should know by now, my favorite shot is by far the backhand.

What I like the most about it is I can always rely on it: good days, bad days... it doesn't really matter, it always works. I could almost say it's always there for me 🥰 and when it's not perfect it's at least good enough.

And you know what? I honestly cannot explain why it's like that 🤷🏼‍♀️. I guess it just comes more natural to me than any other shot.

Which is why I've never really spent much time working on it. (Maybe I should?! It's never good to take the good things for granted!)

Instead, I've always given most of my attention to my forehand, since it's simply the exact opposite of my backhand: it can break at any time, and most of the time, doesn't give me much confidence 🤫 (shhhht, it's a secret so keep it for yourself please!).

I don't know if you remember, but exactly one year ago I got soooo mad and sooooo exasperated because of it 🤬 that I even decided to change it all and learn a brand new forehand from scratch (the Federer forehand).

How did it go? Although from this Federer forehand first progress update it doesn't sound like it, I can tell you that lately I was really happy about it.

For once, I was starting to feel like I didn't have a weaker side. And what's crazier, at times I would even dare to turn on my forehand!!

It finally felt good. I was proud of it. And couldn't wait to use it in my matches.

Then the time for playing a tournament came, and SBAM: bye bye forehand 👋🏻, it was good while you lasted!

That weekend when I lost my forehand

It's Saturday, 8am in the morning, and I'm warming up following, as usual, my super-tested-and-approved pre-match warm up routine before my first ever doubles match in Finland.

As always I feel a mix of tension, excitement and enthusiasm, plus an unusual feeling of responsibility. (You know, I cannot just do shit and pick on myself this time, or my doubles partner will kill me 😬.)

We finally step on the court, and WTF?! Something is very wrong.

My forehand either goes to the moon 🌙 or lands in my own court 😳 (yes, it's not a typo: it does land in my own court for real). I cannot feel it at all. And I have absolutely no clue how to get it going.

🤔 Maybe it's the early morning? 👉🏻 No way: I often practice at 7am and it never happened anything similar.

🤔 Maybe it's the strings? 👉🏻 It cannot be: I've been playing with them only for a couple of days.

🤔 Maybe I'm not moving my feet enough? 👉🏻 I am! How else would every other shot work?

Nope, I really cannot get an answer 😫! So you know what? I'll just stop trying to find one and focus on what's working rather than what's not.

And that's what I do. I try to survive with what I have: either I turn on my backhand, or I chip the ball 🙈. What a nightmare!!

I cannot believe I'm actually slicing every single ball with my forehand 😂, it's so surreal! Where did I even learn it?! It's not even that bad though (I mean, it's not great obviously. But for being my first time, I must say I'm impressed 🤭).

In fact, although my poor forehand performance and surely thanks to my super supportive partner-in-crime, we actually end up winning that match! How crazy 😅!!

But wait, because the absurdities are not over yet!

If you think it's crazy that we managed to win that match (and how to blame you!), how about if I told you that during that weekend and with my forehand still nowhere to be found, not only we won the whole doubles tournament, but I also won the singles tournament?! 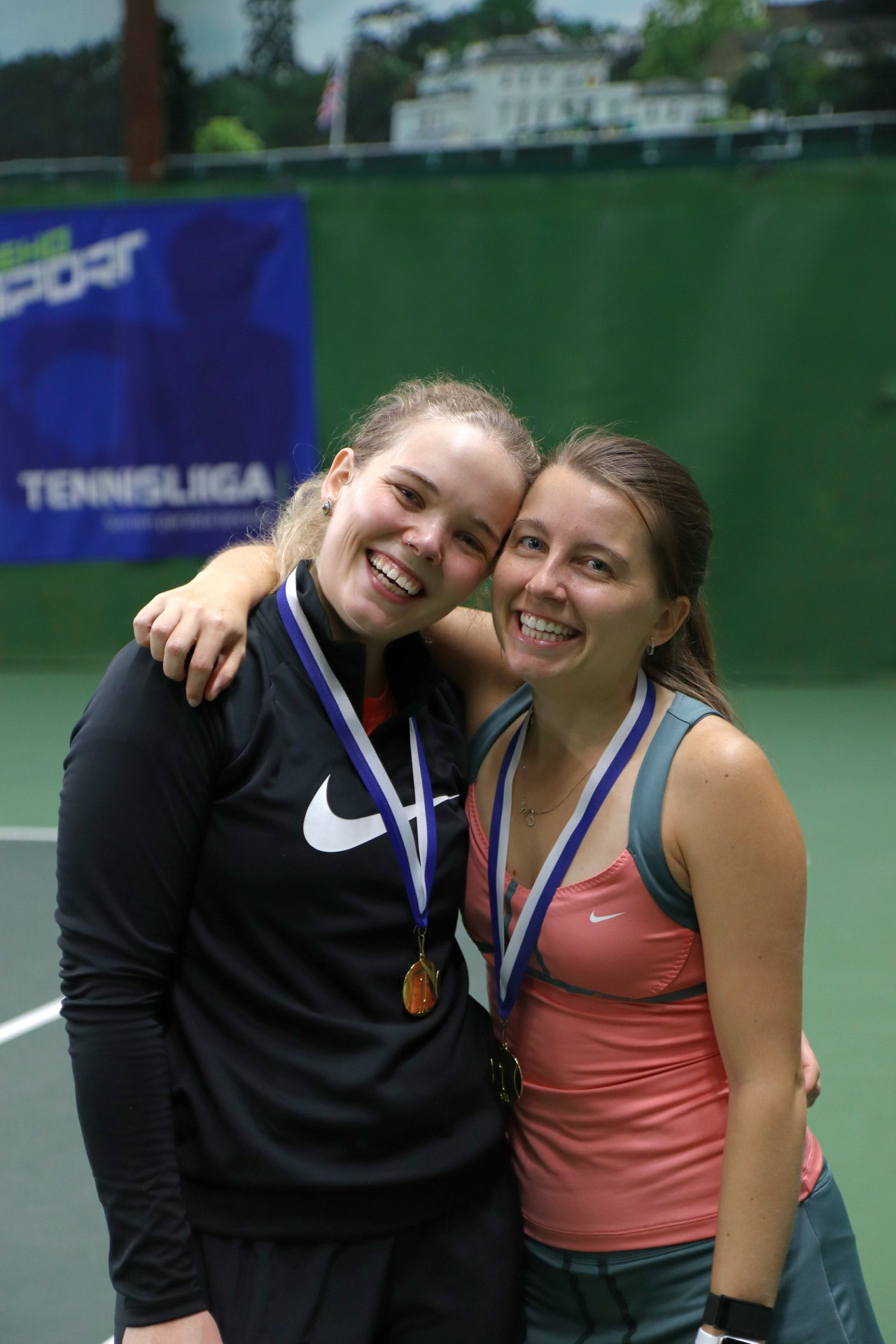 It doesn't make any sense, does it?!

And I even won with a girl I had never won before. (Without my forehand!!!)

For me, it's hilarious! I mean, how can someone win without a groundstroke?!

(I'll tell you: by believing nothing is impossible 😉.)

But anyway... I'm not here to brag about my wins (even though I'm extremely proud of them), but to tell you how I put an end to this nightmare. So let's get to it!

How I found back my forehand

As I've already anticipated, I literally tried everything:

Nothing seemed to work 🥺.

It didn't matter whether it was just me, me and my boyfriend, me and my coach, or me, my coach and a bunch of other girls. The result was the same: absolutely no feeling at all.

And the funny thing was my forehand looked just fine from the outside. So the frustration was double 😭. (Just imagine hearing "That was good!" when all you can think of is "Why does my racket feel like a pan?!" 🤬)

But then my engineer's soul 🤓 took over and decided it was enough, thank god.

So instead of just focussing on the overall feeling of my forehand trying to get it right again, I changed perspective and started approaching the problem in a very different, systematic way: with brute force!

In practice, my idea was this one: I'd just go through all the pieces of my forehand (shoulder rotation, wrist lag, slap, leg drive, hip rotation) and focus on one of them at a time, while keeping everything else the same.

In fact, not only did I identify the source of the problem right away, but I also felt like it was a much more effective (and much less painful) process.

You know that feeling when you have a todo list, and you keep striking items off? When overwhelm, exasperation and frustration leave space to satisfaction, motivation and enthusiasm?! Exactly, that's what I'm talking about! What a relief, you have no idea!!

So guess what? Once I fixed the source of my problems, which was a too subtle shoulder rotation compared to what I used to do, pouf 💨: my forehand was back just like that!

My 2 cents on losing a stroke

Losing a stroke can happen to anybody, anytime.

So if that's on you right now, listen to me: it's not the end of the world 🧨! Remember it's just temporary and there's no way it's gonna last forever!

Just act systematically and you'll get to the root of your problems sooner than you think.

I'm telling you, sometimes our body just plays some nasty tricks on us, and forgets to do what it normally always does in auto-pilot.

So when you get your stroke back (and I know you will!), make me a favor: try to be more mindful of what you're doing when you're playing. Your body will understand that's exactly what it's supposed to do, and won't forget anymore!

And voilà, that's what happened to my forehand! I really hope my experience can help you find your stroke back. I know it's tough, but so are you!

Before you go, don't forget to click on the clap button below and let me know you liked this blog. It would really make me happy 🥰.

Oh, and don't hesitate to share your story in the comments below. You never know who needs to hear it 💕.

07 Nov 2020
#TECHNIQUE
Want a faster serve? Here's how I got 20 km/h more in 1 month
Find out what was wrong with my old serve, what I changed about it and the progress I've made so far, and then make yours faster too ⚡ !
06 Nov 2019
#TECHNIQUE
I'm learning the Federer forehand! Here's why and how
My forehand has been my weak groundstroke since foreverrr: it's never come natural to me, NEVER! And it's not even like I've been neglecting it compared to my backhand and serve, not at all! Instead, I've always practiced it a lot more, just because it never really felt right to me. Hence I think it's time to acknowledge the fact that the WTA bent-arm forehand is not really my thing and move on.
10 Jun 2020
#TECHNIQUE
How I got more power on my strokes with the sweet spot
Want to hit effortless yet powerful strokes 💥 ? The sweet spot might just be the puzzle piece you're missing to turn your shots into dangerous weapons!
Comments
Loading...